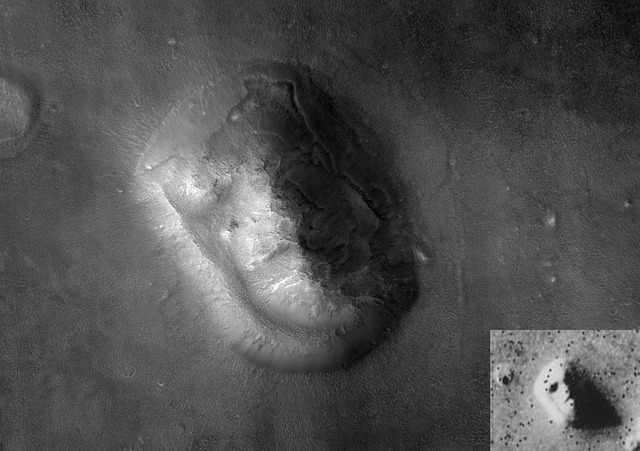 Face On Mars: Signs of a Lost Civilization

Is the highly controversial Face On Mars a remnant of a lost civilization, or perhaps just an optical illusion? This question has been highly debated with many proponents on each side. Unfortunately until we send a man there we may never know the truth.

The enigmatic Face On Mars is located in the Cydonia region of the red planet. The name Cydonia was taken from an important Greek city-state on the island of Crete. This area on mars has drawn major attention from both the academic world and mainstream popular culture.

The first pictures of the Cydonia area were taken in the late 70s by the Viking 1 and Viking 2 orbiters. Most of the pictures had very low resolution, but some of the images showed what appeared to be a humanoid face. This was immediately dismissed by NASA as an optical illusion, caused by shadows and light.

The photo of, The Face On Mars, prompted many individuals whose focus was on extraterrestrial intelligence and alien visitations to Earth, to perk up. The most notable researcher on this topic is Richard C. Hoagland, prominent author and researcher, and science adviser to Coast to Coast am with George Noory. Hoagland argues that the Face On Mars is a remnant of an ancient city that consisted of multiple large pyramids along with the face arranged in precise geometric patterns using Pi as a mathematical constant between angles of measure.

The use of Pi in his opinion shows the presence of an advanced civilization. Higher quality images were sent back in the late 90s which Hoagland dismissed as being overly filtered to distort the features.

In 2007 highly detailed 3d images were sent back in which the Face On Mars was described as being a natural hill on Mars, and that when viewed at a certain angle creates an optical illusion. The high resolution images show no face however I do not see a “natural” hill in the photos either.

Face On Mars or Natural Hill?

Hoagland commented that nothing in these new photos is natural in any way and maintains that an ancient culture existed on Mars and is being kept secret.

I recommend you read some of his great books particularly The Monuments of Mars: A City on the Edge of Forever, and Dark Mission: The Secret History of NASA. I will also be posting some great videos regarding Hoagland’s research into Cydonia and The Face On Mars.