The season premiere of the popular animated series “The Cleveland Show” had a very interesting theme. The episode entitled “Menace II Secret Society” focuses on, get this, the hip hop Illuminati. Now this show is the work of Seth Macfarlane of Family Guy fame.

Also I’d like to point out that Macfarlane will be hosting the Oscars in February, so it’s obvious he is moving up within the elite ranks of Hollyweird. Back to the episode, I did not see it when it aired but I happend to see the description on Hulu today so I had to watch it. I could not believe what I was seeing. They are getting so brave and blatant it is insulting.

The episode’s premise is that the hip hop illuminati, consisting of Questlove, Nicki Minaj, Bruno Mars, Will.I.am, and Kenny West (Kanye West), control everything that is cool. From music to fashion to catch phrases, however the group is growing tired of Kenny’s ego and want to end his career.

Now what was interesting to me was that unlike South Park another show that does satire, all of these stars lent their voices to this. So that means Kanye, Nicki Minaj and the rest were really voicing animated versions of themselves.

Now I know Fox did this before on the Simpsons with the stone cutter episode, but this is so in everyone’s face it is amazing. Now kids and parents will be familiar with the term illuminati, and think it is just something that was on a silly cartoon.

This is just another way to desensitize the masses to Illuminati symbolism and the satanic agendas of the leaders controlling everything from behind the scenes.

“Oh it can’t be true, they wouldn’t talk about it on t.v if the were really in the Illuminati.” Ok sure that is exactly the result they want mindless sheeple dismissing the truth even if it is staring them in the face, which in this case it is, and because of MK-Ultra these artists probably don’t realize that they are outing themselves, because they are under a handler’s control.

I have included a video courtesy of Mark Dice where he gives his view on it, check it out and let me know what you think in the comments section.

Update: The video is no longer available for some reason. Sorry! 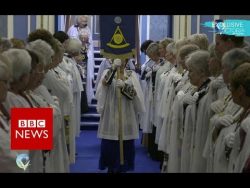